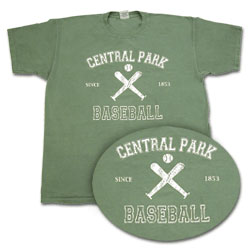 The World Series that just concluded last night has demonstrated that baseball is alive and well. And if anybody wants to point to television ratings as an indication of anything, I’ll simply say this: Baseball was around before anyone knew what television was, and it will still be around after nobody can remember what television was anymore. Television may be the Titanic, but baseball is the iceberg. And remember how that encounter played out.

What that line of thinking–that low ratings is bad for baseball–seems to presuppose that the Yankees, Mets, Dodgers, or one of the other large market teams is needed to give an air of legitimacy to the postseason. And the Cardinals, Rangers, Tigers, Brewers, and every other playoff team this year just proved that you can have a compelling month of baseball without those teams. What happens on the field is what really counts.

The shirt I’m wearing right now is a green one that I bought in Central Park last summer, as shown in the picture above. It was a fundraising-type thing for the Central Park Conservancy, and I was happy to add a few shekels to the cause of keeping Central Park what it is. A city like New York deserves nothing less than an awesome park in the middle of it. Anyway, you can see that the shirt has some crossed baseball bats on it and reads “Central Park Baseball, since 1858.”

I don’t know whether games in Central Park go back that far or not, but it’s possible they could. I’m sure that I wouldn’t recognize too much about a baseball game from 153 years ago. But then again, most of society wouldn’t be too familiar to me, either. In 1858, nobody knew what a telephone was, nobody had ever held a dollar bill before, and almost nobody had ever been photographed. Slavery was still legal in many states, and the Civil War was still three years away. But, if the shirt is to be believed, there was baseball being played back then.

My point is that the game has evolved over the years and decades, but it has also endured. Basketball and football may claim that they are America’s sport of choice, but the NBA is about to do much worse damage to itself this year than baseball did in 1994. Neither basketball nor football is woven into the fabric of this nation as much as baseball clearly is. The postseason and the World Series give us all a chance to remember how great the game is, and how much we, as Americans, rely on it as a way of marking the time.

I’m going to continue writing about baseball-related topics over the offseason, in part because it helps to keep the game alive in my heart and my head. Additionally, I have just been accepted into the Baseball Bloggers Alliance, and I want create even more content than I already have (and it’s quite a lot, believe me) for any of those folks who come on by this way. Some of my posts will be about other topics, because there’s much more to life than baseball, and I’ll never lose sight of that.

This blog will continue to be what it is–Rob’s digital soapbox for putting thoughts and ideas into the wider world. It’s heavy on the baseball, for sure, but has some pretty diverse and eclectic things thrown in, too. Interesting enough–I hope–to come back to on occasion, at least.

The offseason begins today, so let’s make it a good one!