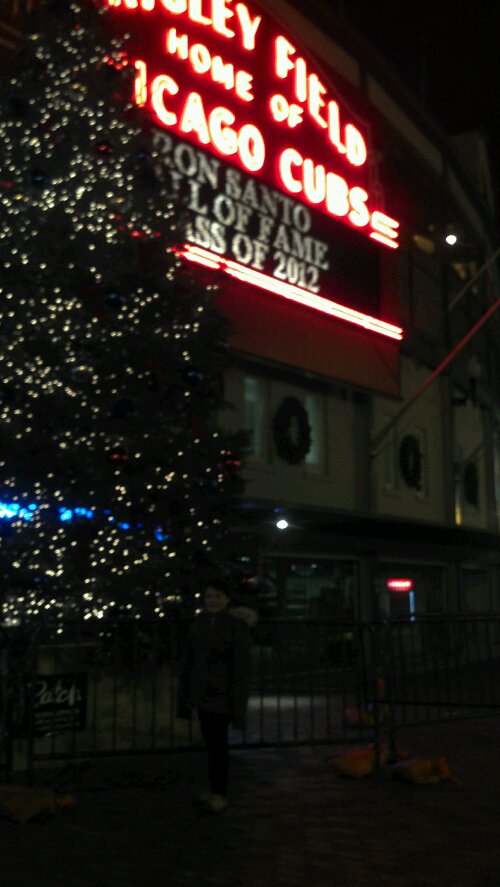 Christmas is certainly a unique time of year. The holidays bring out a side of people that remains hidden for most of the year. Maybe its the snow, or the gift giving, or the reflection that accompanies the end of another year here on earth. Whatever it is, we all need at least a couple of weeks off from all the crap that comes with everyday life.

Against that backdrop, we received word of Ron Santo’s Hall of Fame election earlier this week. I was in the general vicinity of Wrigley Field on the day it was announced, and so I went over to pay my respects. There were flowers at the base of Santo’s newly-minted statue, along with notes of congratulation. I tried to explain to eight year old daughter about the things he did as a player and an announcer, and the money he helped to raise for Juvenile Diabetes research.

We then walked along Addison Street, and came to the marquee along Clark Street that proclaimed the news to all passersby.The weather was a bit chilly, but the people in the area, myself included, didn’t mind it at all. There was a happy convergence of the holiday season with the feeling that a long wait had finally been rewarded.

We Cubs fans know about waiting. Most of us have waited all our lives to see a World Series involving our team. Some of us, like Ron Santo, might not live to see those dreams realized. But still we keep the faith, knowing that when it finally does happen, there will be a collective catharsis for those who are around to see it: Banks, Williams, Jenkins, Kessinger, and countless others who have worn the uniform, or cheered for those who did. And hopefully I won’t need to explain that to anyone.