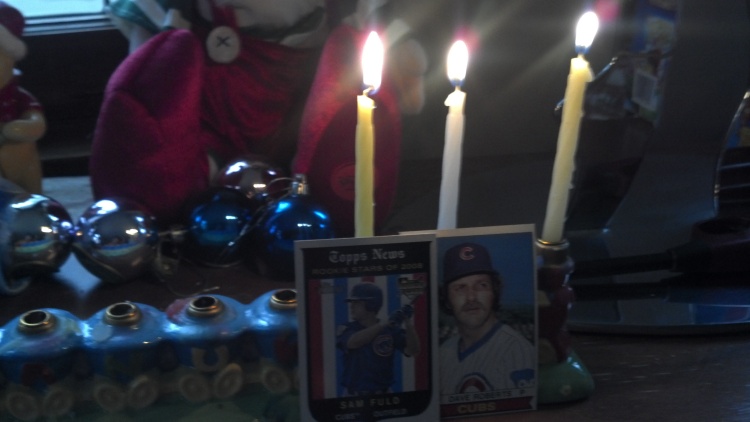 As with last night, and every night during this festival of Jewish Cubs players, the shamash is the vocal stylings of the late Steve Goodman (with some help from others this time):

Tonight I’ll be discussing Sam Fuld, who was drafted by the Cubs and with them for many years before being traded to the Tampa Bay Rays earlier this year. I have discussed that trade here. The short version of the trade is that the Cubs gave up a number of good young prospects–Fuld being the primary one–so that the Rays could dump Matt Garza, a talented pitcher who they could no longer afford. And now there’s talk that Garza himself could be traded this offseason.

Former Cubs GM Jim Hendry really rolled the dice with this deal, and although Garza’s ERA was solid–and his underlying stats were also very good–he had just 10 wins to show for his efforts last season. The more that Fuld and the other prospects accomplish in the big leagues, the worse this trade will look over time, especially if Garza is traded away by the Cubs.

Like the late Ron Santo, Sam Fuld is a Type I, insulin-dependent diabetic. Unlike Santo, though, Fuld is open about his condition, and this is likely the result of Santo’s results on the field. Santo hid his diabetes, out of his fear that he would be forced to retire if his condition became known. Managing this condition is a difficult task, and I’m glad that Fuld is able to do this in the light of day.

Fuld is also a stats guy, or should I say a STATS guy. He once served as an intern for STATS, Inc., charting pitches as they were thrown during baseball games. He is also working on an advanced statistics degree in his offseasons. As someone who barely scraped by in a basic stats course, I am   in awe that he can do this in what amounts to his spare time.

Sam Fuld never really had a chance to break in with the Cubs at the major league level, and that’s unfortunate. After his initial call-up late in 2007, Fuld was odd man out in an outfield that was stocked with Alfonso Soriano and Kosuke Fukudome (two Jim Hendry signings that were being paid big money), Milton Bradley (what a disaster that move was), Reed Johnson (who is apparently coming back for another year), and Tyler Colvin (who turned out to be a one-season wonder in 2010). Marlon Byrd was the third Cubs outfielder in 2010, and he was a multi-million dollar free agent who was also an All-Star that year. Unfortunately, there never was any room for Sam Fuld in the Cubs outfield, as long as Jim Hendry’s projects were still around.

Had the Cubs just held onto Fuld for the 2011 season, they could have immediately slotted him into right field once Fukudome was traded away to the Indians. And the Cubs would have had a right fielder who is still several years away from free agency, and can make plays like this (and I love how the White Sox fan gives Fuld grief as he’s laying on the warning track. I doubt he could have made a play like that). Instead, the Cubs had to go out and spend millions to get David DeJesus instead.

I wish Sam Fuld all the best in his career–both in baseball and in statdom–but I also recognize that he could (and should) still be in a Cubs uniform for 2012, but for a short-sighted move made by Jim Hendry almost a year ago. And the full ramifications (or should I say, the Sam-ifications) of that deal will not be known for several more seasons.

And here’s the full version of the Fuld card: