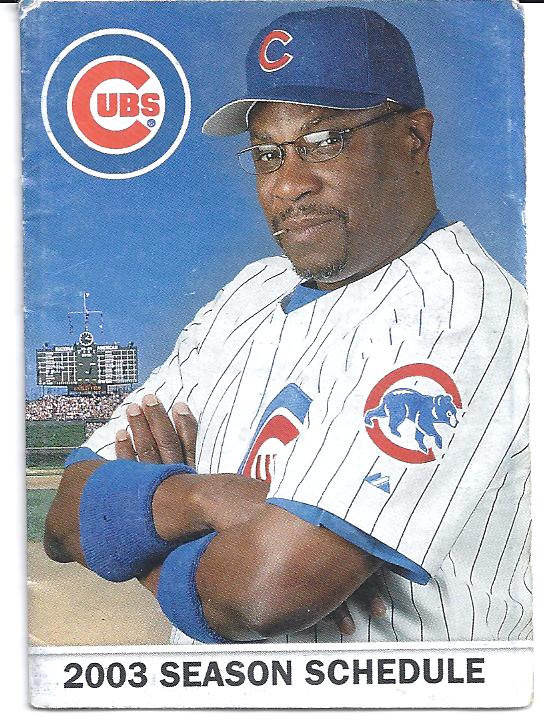 Back in 2003, Dusty Baker was a hot managerial commodity. He had managed the San Francisco Giants into the 2002 World Series, where his team lost to the Rally Monkey (and the Anaheim Angels, as they were then called) in seven games. The Giants had a 5-0 lead in Game six of that series, and their Win Probability was as high as 97% at one point late in the game. And yet, somehow, they lost the game and the series. But no matter, he was coming to Chicago, and whatever he did with Barry Bonds could easily be replicated with Sammy Sosa.  Things were looking up for Cubs fans everywhere.

Baker wore number 12 as a manager, which is the reason I’m writing about him here. I was once again mentioned on the list of top fan blogs at mlb.com/blogs, and my position on the list this month is number twelve. The current player wearing 12 for the Cubs, Alfonso Soriano, has been a large disappointment over his five years in Chicago, and if there’s ever a day I want to write about him in this space, it won’t be anytime soon. So Baker it shall be, instead.

The 2003 Cubs had a young Mark Prior, a healthy Kerry Wood, and rising starters Matt Clement and Carlos Zambrano. A previously unheralded Joe Borowski emerged as a reliable closer, and the Cubs–for a change–had their pitching ducks in a row. And we know now that pitching wins pennants, for the Cubs and for everyone else, too.

On the offensive side of the coin, it was still Sammy Sosa’s team, and he was putting up gaudy numbers every year. The Cubs had also brought in veteran Moises Alou for some extra pop, and a number of key acquisitions such as Aramis Ramirez, Kenny Lofton and Randall Simon were made as the season progressed. But as of August 1, the Cubs were barely more than a .500 team. As of September 1, they were still in third place in their division. But winning 4 of 5 from St. Louis, in an epic series at Wrigley Field, seemed to launch the team. It was a fun month, which is something that September rarely is for Cubs fans.

A sweep of a doubleheader at home, on the final Saturday of the regular season, clinched the division title, but there was a pervasive sense that simply making the playoffs would not be enough. They then beat Atlanta, for the team’s first postseason series victory since the 1908 World Series. Momentum was on the Cubs’ side, it seemed, and beating the wild-card Marlins was almost taken as a given. The World Series was calling, and the Cubs seemed destined to be there.

And then came Game five in Miami. I wrote about that game here, and I wasn’t too concerned that Josh Beckett had thoroughly dominated the Cubs. The series was returning to Chicago, and it would mean more to win the pennant there, anyway. Years of Bulls titles in the 1990s taught me that it was better to wrap up a series in front of the home fans.

Game six of that series is something I’ve written about many, many times in this space. But the long and the short of it is that, like the 2002 Giants in the World Series, Dusty Baker’s team somehow found a way to snatch defeat from the jaws of victory. But this time, the hometown fans had to sit and watch as it unfolded. I hardly even remember Game seven anymore, but Game six probably won’t ever leave my memory.

So why harp on Dusty Baker? Aren’t the players the ones who are on the field? They are, but Baker also played the game, in an era where pitchers threw many more innings than they do now. In 1977, the year that Baker hit 30 home runs for the LA Dodgers, four pitchers in the majors threw more than 300 innings; by 2003, no pitchers did that. The game had evolved over the intervening quarter of a century, but Baker’s mindset hadn’t changed along with it, at least where his handling of pitchers like Wood and Prior was concerned.

Dusty Baker had signed a four-year contract to manage the Cubs, and they went progressively downhill after 2003. By 2006, his final year in Chicago, the team was so bad that I refused to go to Wrigley to see them play in person. In the twenty-five seasons that I’ve lived in Chicago, 2006 is the only one where all 81 home games came and went without me in the stands at least once. I just couldn’t support the team that season. It was hard, because I love going to ballgames at Wrigley, but in my mind I had to do it.

Fortunately, Baker was let go after 2006, and now he’s managing the Cincinnati Reds instead. The team that the Cubs played today, ironically enough. But as long as he’s still managing in the majors, he’ll be a reminder of what might have been that season, nearly a decade ago.