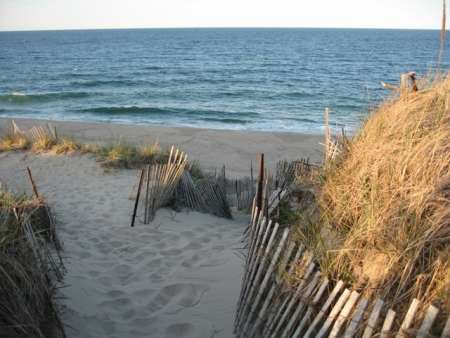 I’ve been here on the Outer Cape for the past two weeks, and today is my last full day here. I’m not looking forward to getting back to my life in Chicago, but I have to do it. My home is there, my kids are in school there, and every tangible possession that I own is there, as well. And the credit cards have taken a pounding in the time I’ve been here, so that has to be paid for, somehow.

I’ve packed several months of living, at least, into the past two weeks here. I’ve written about some of it here, and will hold some of the stories in my memory and try to do them justice when I get back home. Summarizing this trip, in my limited time on the public computers of the Wellfleet Public Library, seems like a fool’s errand. Luckily, I’m just foolish enough to give it a try.

What I love about Cape Cod is the beauty of this place. Everywhere you look, there’s something where I tell myself “There’s a pretty sight. Someone could put this on a postcard with the words “CAPE COD” on it and I’d want to buy it for a souvenir.” I haven’t actually sent a single postcard on this trip, but I have bought a few postcards to take home and remind myself of this place.

I’ve also tried to take some pictures with my camera phone, but the memory on my SD card has long since been filled up. But pictures can’t do this place justice, anyway. I don’t have a picture of my own to share right now anyway, and I’ll probably just end up borrowing one from the internet to share with this post, anyway. But take my word for it, this is a truly lovely place.

And it’s not just the visuals that make this a special place. There are sounds that I hope will stay with me after I head out tomorrow morning. There’s the gentle lapping of the waves on Mayo Beach, or the crashing of the ocean waves on the ocean beaches, or even the ringing of the bells that are meant to indicate when its low tide or high tide.

There are also the smells of the ocean, and the unmistakable activity that takes place in the many shellbeds around town. It’s the smell of death, in a sense, but it also reminds me that the ocean and the bay aren’t like life on the land. The sand dunes that this town and all the others are built on are not “land” in the sense that I know it, and perhaps that you know it, but are just the place where the water runs out of space. Or maybe where the water occupies at high tide, and then flows away from at low tide. But the water leads around here, and humanity does what it can in the spaces in between.

And the sensory feelings in this place can’t be overlooked, either. The winds that blow in off of the water are unlike anything I’ll experience back in the Windy City that I call home. Taking the ferry to Martha’s Vineyard took about a half an hour on the water, but in that time I understood how life on a boat could seem so appealing. I have read the parts of Moby Dick where Herman Melville describes life on the sea better than I ever could, but feeling the breezes, on land or on the water, is something that defies an easy description. But we’d all be better off for experiencing it.

And the last of the senses, the one that comes through the tastebuds on our tongues, is also satisfied here. I’m not much for seafood, generally, but the taste of the sea that comes from oysters or lobsters or clams seems more intense here than it ever does back in Illinois. And, perhaps just as importantly, I’ve discovered the taste of linguica  on this trip. I realize it isn’t a seafood, but it’s a Portuguese staple, and the Portuguese community is one of the few that has never made inroads in Chicago. So come tomorrow, my chances of finding this spicy sausage variety back home will be approximately zero. I miss it already.

I hope that everybody reading this either has, or someday will, understand what I’m talking about when it comes to Cape Cod, and the outer Cape in particular. But for now, I’ll leave this place with lots of fond memories, and the sincere hope that I’ll be back again someday. And the sooner, the better.