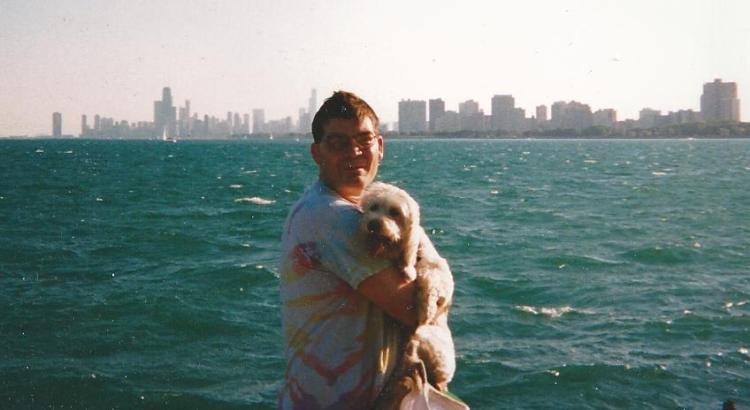 As part of my ongoing attempt to preserve bits and pieces of my life from the pre-digital photography era, I am presenting some commentary for an image that dates from somewhere around 1996.

I was never a dog person growing up. The neighbors across the street had a dog, and the lady next door had a dog that we would feed when she was away, but dogs were not a part of my life. I was actually raised to fear dogs, because they would bite me any chance they got, or so I was told.

Getting a dog of my own wasn’t something I was very excited about, but back in the 1990s it finally happened, My wife and I got a wheaten terrier/cocker spaniel mix named Zoe. It was a gateway to having children, I now realize, since it was the first time I had to care for something that could not care for itself.

As the picture indicates, Zoe became something special to me. And so when I came across this picture while going through a drawer full of old things, I couldn’t help but smile. It’s certainly not the best picture that I ever took, but my dog looks happy, and Lake Michigan looks bluer than usual, and life was probably very good on that day.

Zoe is now a memory, albeit a very fond one. A new dog has taken her place, and my family will probably never be without a dog. My children will grow up appreciating dogs, instead of fearing them, as I once did. And for that, I’m very grateful.