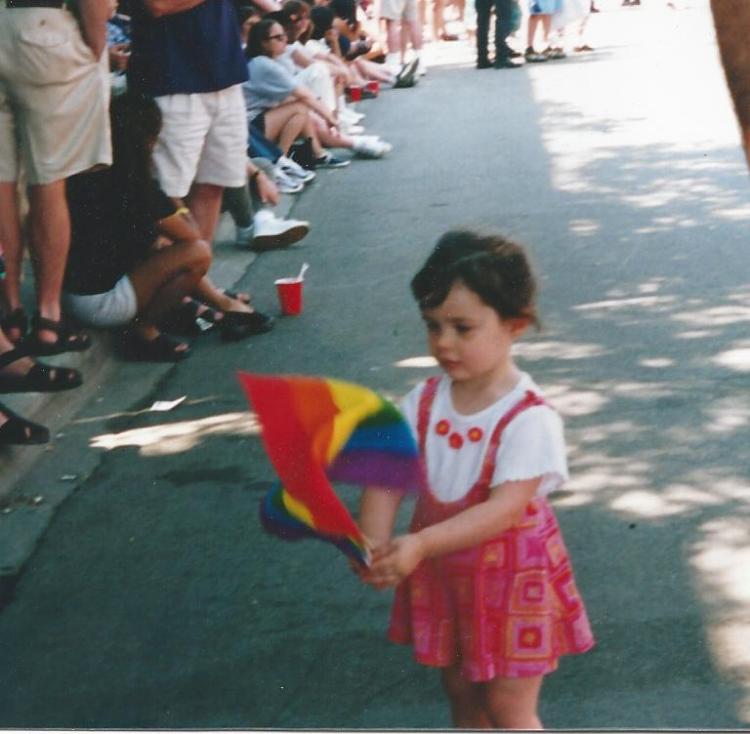 My best guess is that this picture was taken in 2003, when my oldest daughter was four years old. It was taken at the annual Pride parade in Chicago, on Broadway Avenue somewhere between Belmont and Diversey.

When I was her age, back in the early 1970s, the idea of a Pride parade was unheard of, except in New York and a couple other places, including Chicago. But in the time between my being four, and having a four year-old of my own, a lot has changed. And on this front, it’s moved in a direction I’m happy with, because rights are rights, no matter who you are.

My right to be married is, at present, dependent solely upon my sexual orientation. It’s not about procreation at all. If it were only about that, people who are sterile couldn’t get married, and those who married but did not have children would be charged with a crime. Neither of these is the case.

People who happen to love someone of their same sex don’t have the same rights that I have. It’s wrong to give me the right to marry one type of person, and while denying me that same right when it comes to another person. I’m already married, so this doesn’t directly apply to me, but anyone else could make that same argument themselves. So I’ll make it for them here.

I’d like to believe that I would have been on the right side, historically, of past civil rights struggles like abolitionism or women’s suffrage. That would have taken courage, though, to go against long-established social norms. The easy thing to do is to go along with things as they’ve always been. If that denies people of basic human rights, though, it’s the wrong thing to do, as I see it.

So back to the four year-old holding the Pride flag. So much has changed in society during my lifetime, and gay rights is high on that list. Saying something or somebody was “gay” used to be a huge put-down in the time and place where I grew up. I want to believe that “gay” is a term she’ll never use to make others feel badly about themselves.

I also want–when she comes of age–for her to have the right to marry anyone she wants to, whether it’s somebody named Steve or somebody named Sally or somebody with any other name that I can’t imagine right now. Denying her–and everybody else–that right has gone on long enough, in a nation that calls itself the land of the free.

Today was a huge day in my home state of Illinois. Both houses of the state legislature voted to give all of the state’s citizens the right to marry whoever they want to. And as someone who’s lived here every day of my life, I couldn’t be any happier.