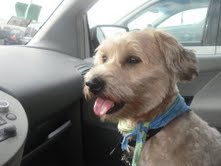 My older daughter is currently appearing in Romeo and Juliet, and the final two shows are taking place this weekend. Seeing the show performed live has made it come alive for me, in a way it never was before. Better I should come upon this later in life than not at all.

One of my favorite lines, perhaps because it is said to my daughter’s character, comes in the play’s first scene. When Sampson, one of the servants of the Montagues, bites his thumb at one of the Capulet’s servants, the servant says “Do you quarrel, sir?” and things go downhill from there, ending up in a sword fight that sets the tone for the rest of the play.

Over the past few days, I have been repeating this line a lot. It seems to annoy the Shakespearean teen, and everyone else in our house, except for my dog Dooney. He gets it, at least. Or he’s not able to tell me he doesn’t, which is the next best thing.

Whenever I say “Do you quarrel, sir?” to Dooney, he starts licking my face. The irony of his response, and the wet dog slobber, is always good for a laugh. Man’s best friend, indeed.