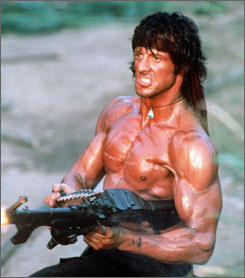 Some people are of the opinion that a penny on the sidewalk can only be picked up when it’s facing heads up. I, however, will take them any way I can find them.

This morning I found a heads-down penny in a parking lot. I nearly passed it by, but then I stopped, picked it up, and turned it over. And I found the year 1985, which was an interesting year in my life for many reasons. But I don’t want to write about any of that here. For some reason, I want to write about Rambo, instead.

Well, maybe not actually Rambo, per se. In 1985, Stallone had brought Rambo back, in the sequel to First Blood, and sent him back into Vietnam. Rambo: First Blood Part II was a big, shoot-the-bad-guys type of film that defined movies in the 1980s for me like nothing else did. And it led to something that I remember to this day.

A friend of mine from the earliest days I can remember wrote a “Best of 1985” piece for our high school paper. We were both editors of the paper, applying the brand of smart-ass sarcasm that David Letterman seemed to embody in those days. We even created a column that turned the traditional “Senior Spotlight” on its head by roasting students in whatever terrible ways we could think of. It wasn’t any of our finest moments, but there it was, anyway.

So my friend’s 1985 piece appeared in early 1986, and I took exception with his choices in the next issue that came out. In hindsight, I wish that I had come up with the year-in-review idea myself, and I was really trying to cover that up with a “well here’s what I think rebuttal.” I responded to a swipe he had taken at Bruce Springsteen , since I was into Born in the U.S.A. at the time, even though Springsteen’s more meaningful earlier works were still a mystery to me.

But the main focus of my uncalled-for rebuttal had to do with the fact that the year’s ten best movies didn’t include Rambo. Only in the narrow mind of the 17 year-old that I was back then could Rambo have been on a best movies of the year type of a list. But I made that case, anyway.

For the rest of 1986, until we graduated and went our separate ways in life, my old friend and I traded shots at each other in the high school paper. He returned his fire on me, and I returned my fire on his reply to my reply to his original list, and so it went. I thought that people somehow wanted to buy the paper to read my reply to his reply and so on, but in reality we were just marking the time of our final high school days. I remember, in my final words on the matter, extending the hope that if we went to college together, we could drag everything out for another four years. Of course, it didn’t happen that way, and that’s for the best.

I saw my old friend in New York a couple of years ago, and we got together to relive the old days at a bar. I can’t remember whether we brought this particular exchange up or not, but it was clear to me that both us had traveled far in life since those days. Whatever things were written back then were born out of youth and the stupidity that attends to it. And writing this now, with the benefits of all the living that has happened since then, I realize that.

So if this piece had a Sam Elliott moment, this would be it. Sam would say something about how we learn life’s lessons best when we learn them the hard way, and hopefully these lessons reveal themselves to us and make us into better people. Or something like that. I’ll catch everyone on down the trail.

2 thoughts on “Those were the days”