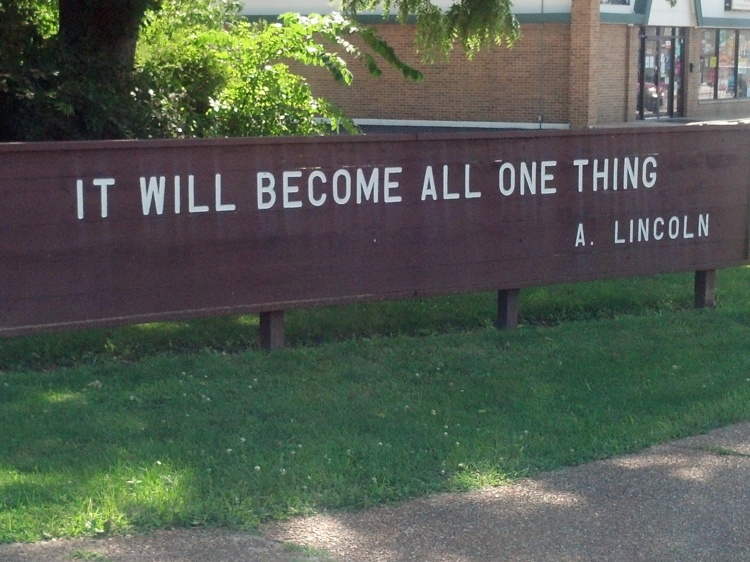 Last weekend, my Chicago family (wife and two daughters) and I drove to Springfield to visit my family there (parents, two brothers, sister, and two nephews). It was a great day, and I couldn’t have been any happier with how everything went. And I even stumbled upon a Lincoln story, entirely by accident. But those make for the best stories, don’t they?

My parents decided, correctly, that everyone could go for some pizza. They called up the nearest pizza chain restaurant on North Grand Avenue, and I volunteered to go and pick it up. So with my youngest brother and my older daughter in tow, I headed out to gather up the food.

The pizza place was just a few minutes away, and I was able to take a shortcut through Oak Ridge cemetery, which is best known for being the site of Lincoln’s Tomb. I drove past the tomb and explained to my daughter the custom of rubbing Lincoln’s nose for good luck. I wanted to go and do it for myself, but parking was a bit too scarce, and I knew better than to dally for too long. And I was a bit hungry, too, so it will have to wait for another day.

We left the cemetery, and the pizza place was literally at the end of the block. We pulled in a few minutes earlier than the agreed-upon time, and the pizzas were still in the oven. It was at this point that I noticed a random Lincoln quote displayed on the other side of the street. My brother agreed to continue the pizza vigil, as I crossed the street for a better look at the quote.

It was a fragment of a sentence from Lincoln’s “House Divided” speech, which he delivered in Springfield in 1858. With the benefit of hindsight, his words proved to be nothing less than prophetic, as the states did indeed become all one thing, when slavery was abolished. It took years of warfare, and thousands upon thousands upon thousands of deaths, but it did play out just as Lincoln said it would.

I took a picture of the quote and ducked back across the street, just in time to help my brother get the pizzas out to the car. On the return trip, I asked myself what Lincoln would have thought of pizza, since he never tasted it for himself. I then wondered if he would have taken any satisfaction from knowing that his words were proven true in the end. As I drove past the tomb, on my way back to my parents’ house, I decided that some things would just have to remain a mystery.