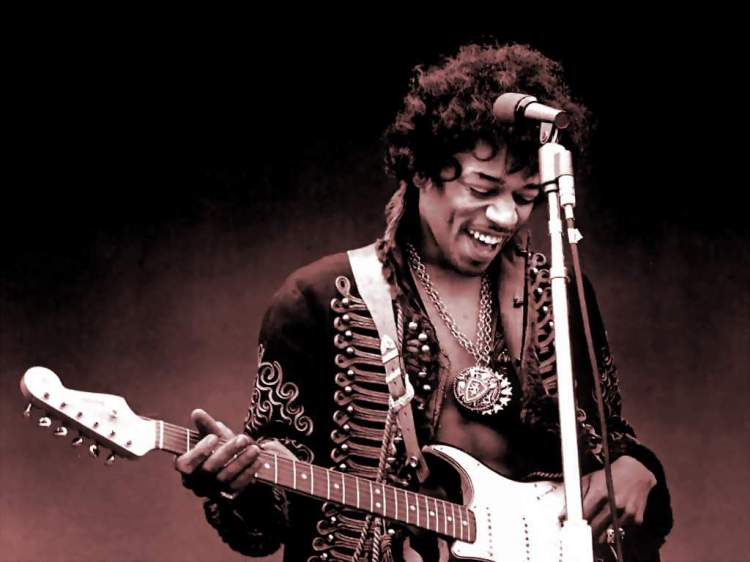 I was raised to be a Catholic, but Catholicism was like a transplanted organ for me, in that my body rejected it. What takes the place of religious faith–at least for me–are the things that I believe in. Like most people, I have some things on this earth that help to explain the things I don’t quite comprehend.

One of those things is rock and roll. I discovered it back in the late 1970s, and I listened to Page and Plant more than I ever did to the men who ran my all-boys Catholic high school. The recent Pearl Jam concert at Wrigley Field was far more uplifting and life-affirming than anything I ever experienced at a Catholic mass.

So when I found myself out in Seattle a number of years ago, with a rental car and a few hours to kill before my flight took off, I had what for me counts as a religious experience. The GPS that came with my rental car had a feature for “Nearby Attractions” and I pressed the button to see what the area had in store. And when “Jimi Hendrix gravesite” came up as being just a few miles away, I knew it was time to make a pilgrimage.

Geoffrey Caucer’s Canterbury Tales  grew out of some stories told by pilgrims on their way to visit a religious shrine. I had no traveling companions with me, but I wanted to go to a spot where the original guitar god was laid to rest. When else would I ever get the chance to do this?

Jimi Hendrix defined what the electric guitar can do. When we use the term “rock star” to describe somebody in a positive way, we have to acknowledge that Jimi Hendix was a certified Rock Star. So to be in the presence of a marker to this guitar god/rock star was too much to pass up.

I pulled into the cemetery, expecting to see markers or some form of guidance to the spot. I didn’t expect to see markings on other gravesites as with Jim Morrison’s grave in Paris, but I thought there would be something. But it turns out I was on my own, so I got out and walked.

After about ten minutes of wandering about through an empty and somewhat creepy graveyard on an overcast day, I came to the spot. It has since been augmented with a memorial of some kind, but in those days it was just a small rectangular spot on the ground. It would have been very easy to miss, actually, but I wasn’t leaving until I found it. And I’m glad I did.

As I stood in front of the grave marker, I wondered what I should do, And something came to me right away. I went back to the rental car, drove it over to where the grave site was, and I pulled out a Stevie Ray Vaughn CD with his cover of Hendix’ “Little Wing” on it. I turned the music up as loud as I could, and stood at the grave as the music played.

Cemeteries are supposed to be quiet places, but one of the things that I’ve always appreciated about rock and roll is that it encourages you–and almost expects you–to break the rules. And Stevie Ray Vaughn was certainly a high priest in the guitarist pantheon, so his tribute to Hendrix was most fitting for the occasion.

Toward the end of the song, I even broke into some air guitar of my own. Hendrix and Vaughn gave their music to those of us who want to celebrate it, and air-guitaring in an otherwise empty cemetery in Renton, Washington will always be a personal highlight of my life. That’s just how I roll (and rock).

3 thoughts on “An unexpected pilgrimage”