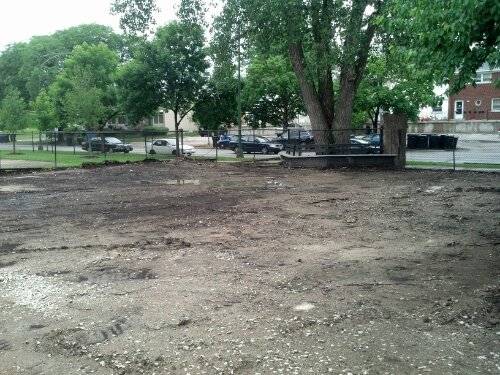 Today brought a particularly cruel reminder of the changes that life has in store. Chippewa Park is a small little niche in the public parks of Chicago. If you live more than a mile away from it, you probably know nothing at all about it. But in another sense, if you’ve ever had children, you know some place exactly like it.

Chippewa was a place where I would bring my two young daughters to play. There was a slide and some swings and a large climbing structure, where we would spend time laughing and inventing games and finding ways to have fun. I say “we” because it was my time as well as theirs.

I always knew that these days wouldn’t last, and that my daughters would grow out of this one day. I promised myself that I would drink in those days, and enjoy every last drop of being an essential part of their lives. And, for the most part, I think I’ve accomplished that. But that didn’t make the sight of the empty ground, where the playground equipment once stood, any easier for me this morning.

It had been a few years since we last visited Chippewa Park, even though we drive past it all the time. My daughters have indeed outgrown the playground stage of childhood, and our relationships have changed along the way. I’ve become something other to them than I was in those days.

It’s unfortunate that we can’t freeze moments in time, or all of us would have done so at one point or another. Freezing an afternoon with my daughters in Chippewa Park would have been all right with me, but life marches on, and playgrounds and childhood are no exceptions.

The playground equipment that helped to mark my daughters’ younger days still exists, in other places around the city. But the memories I have of this place will remain with me, even if I can longer see the swings where they once sat, or if the swinging tire they once enjoyed so much has now gone someplace else.

If you have a child in your life, embrace them, and also embrace the fleeting nature of their childhood. When it goes away, or at least morphs into something other than what you’re used to, there’s no getting it back.

2 thoughts on “This used to be our playground”