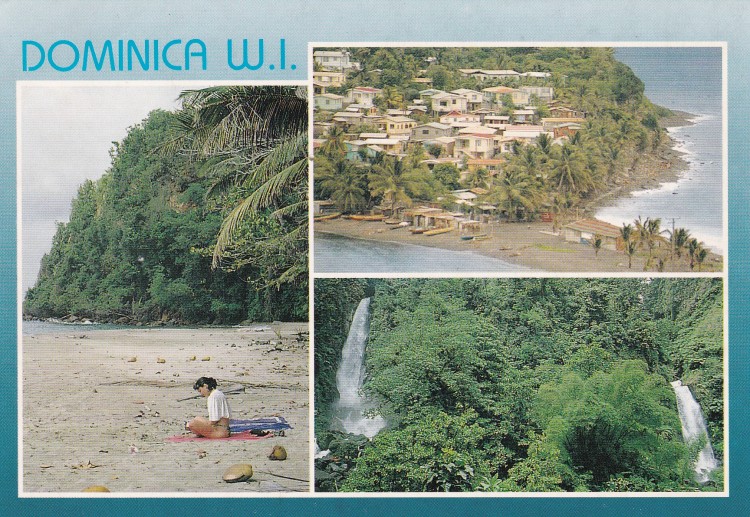 The first time I ever left the boundaries of the United States was for my honeymoon in August of 1992. My new wife and I took a Caribbean cruise, leaving from San Juan and going through the islands of St. Thomas, St. John, St. Maarten, Barbados, Dominica, and Martinique. The sunshine and natural beauty of the Caribbean overwhelmed me, and so too did the crushing poverty that I saw. It was my first encounter with the meaning of the term “third world.”

Tourist dollars like ours seemed to be what kept these places afloat, if floating can accurately describe what was going on. The cruise ships bring the tourists, and the locals do what they can to separate the tourists from their money. Giving tours is a big moneymaker, for sure, and they may be the thing that I remember most about these islands. Our tour of Dominica may have been the one I remember the most.

The infrastructure, such as it was, of the islands seemed to decline as the cruise progressed. From Charlotte Amalie and the duty-free shopping it offered on St. Thomas, and the FU money of those who could afford to live or vacation on St. John, there was a precipitous decline when we got to Barbados, and even more so when we arrived in Dominica. But it was also the most pristine of the islands we had seen, and the explanation of how a rainforest worked was facinating, at least to me.

By the time we arrived at a waterfall on Dominica, and bought a piece of fruit from a local vendor, I had decided that the beauty and the poverty of Dominica were both beyond what I was ready for. I was grateful to have a cruise ship waiting for me, to take me onto the next island and, ultimately, away from the Caribbean altogether. But the tour guides and the fruit vendors weren’t so lucky. They had to stay on Dominica and wait for the next cruise ship to arrive, to repeat the same process all over again.

The devastation of Tropical Storm Erika on Dominica makes me sad today. The cruise ships that take their patrons to the shores of Dominca could surprise me and come up with some money or supplies to help the people of the island in their moment of need, but it would be far easier to look for other places to dock their boats, or simply bypass the island altogether. Who wants to see destruction and human misery on their vacation?

Places like Florida, which is next in the path of this storm, will also feel an impact, possibly even a strong one, but in the end they will rebuild. Insurance money and other resources will flow to Florida in a way that they never will to Dominica and the rest of the Caribbean. The people on that island–and the Caribbean as a whole–are truly on their own. I wish them the best.