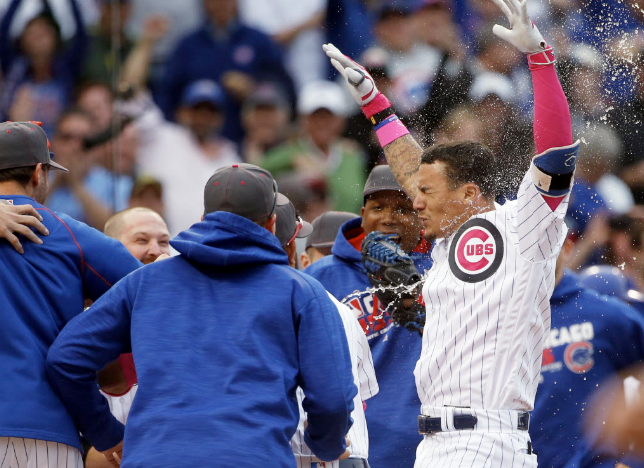 The Cubs are off to an amazing start this year (24-6 through the first 30 games) and I haven’t yet written a single word about it. I voluntarily disengaged from my long-time writing gigs with FiveWideSports and ThroughTheFenceBaseball, just in time to have the Cubs catching fire like this. It’s all in the timing, I suppose.

Javier Baez hit a walk-off home run in the 13th inning to get the win today. I was very hard on Baez in his rookie season, because he struck out too damn much. But he had a hard time last season, between injuries and personal issues, and he kept on going to get through it. He even got injured before this season started, but he kept his head up and here he is. I’m certainly pulling for him going forward. For all the talent he obviously has, he’s a survivor, too.

I really don’t like the word “bae.” Kids use it, in part, because adults do not. If I were to call someone “bae” it would feel strange, and my children would make their displeasure known. Some terms they don’t want me using, and I don’t have the urge to use them, either.

But “bae” happens to be first three letters of Baez’s last name, and adding the Z separately at the end–a la Jay-Z–seems like it can work. I’m going to call him Bae-Z, especially when he goes deep in extra innings to win the game. And the odds are very small my children (or anyone else, for that matter) will encounter that term here.

None of this will matter once October arrives. The Cubs have to bring home the pennant and the World Series this year, because at least a few of the Cubs fans enjoying this year’s great ride won’t be here when the 2017 season rolls around. I’m not being ominous, as much as I’m stating a fact. The sooner the Cubs climb to the the mountaintop, the more fans will be able to die happy when their time comes.

But so far this year has been amazing, and I hope it continues.