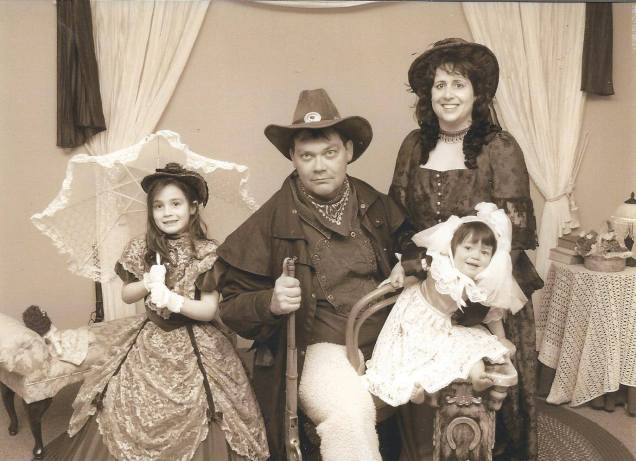 As what may be my family’s last spring break rolls on, here’s my favorite image from the first one, back in 2005. My older daughter–who just turned 18 a few days ago–was in kindergarten at the time, and we spent a week in Arizona.

Near the end of the week, we went to a chuck wagon supper at a place I’ve since forgotten about. One of the attractions ions we could do was pose for an old time where photo in period dress. My kindergartener saw the blue dress and decided she had to wear it. So we all got dressed up, and the photographer captured a literal snapshot in time for us.

To remember that moment, and marvel at how quickly time passes, that snapshot is presented here. Many thanks to my two girls– who will always be “little” in my mind, no matter how old they get– for allowing me to take them to places I otherwise would not have gone. Thanks also to my wife, who picked out a number of interesting places to go over the years.

Yesterday we were at the Japanese garden in Portland, Oregon when a family with three cute little girls caught my attention. I understood, in a way that I couldn’t have back in Arizona, that we are lucky to be where we are at any given moment, and that having children is like a concert or a play that’s over before you want it to be. All we can do is enjoy it while it unfolds, as much as we possibly can. And in the end, we’ll wish we had done more. But the memories of what we did do will just have to be enough. 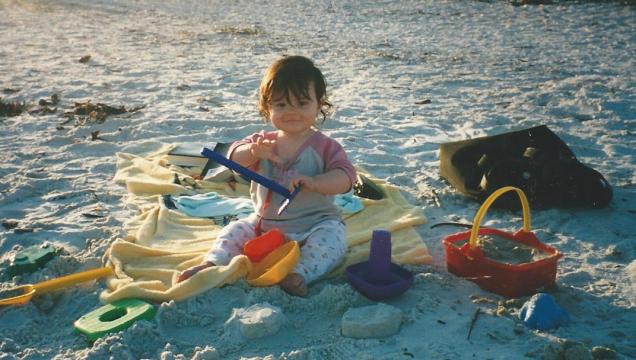 I remember this picture well. It was taken in late December of 1999, as we had traveled to Sanibel Island, Florida, to celebrate the coming of the new millenium. Fears of Y2K were in the air. Remember that? It seems silly now, all these years later, but the idea that computers would get all wiggy when the year switched to 00 had great currency, at least in some quarters.

But I had other concerns at that point in my life. My first daughter was born in April, which would have made her almost nine months old when this picture was taken. We hadn’t yet gone over to digital photography–that was still a few years away–and so this picture had to be taken in to be developed. There are now boxes and boxes of these prints, gathering dust in the basement of the house, bearing silent witness to one of the many changes that have come about during her lifetime.

She looks so happy in this picture. Sitting up was probably a new thing at this point, and I think it was the first time she had ever experienced sand, too. But the little grin on her face tells me a lot. She was having fun, and as a parent that’s the best you can ever hope to see.

The little girl playing in the sand starts high school tomorrow, and the relentless march of time will only get quicker over these next four years. She’s brought me more joy than I ever would have imagined, and I hope that it’s been as much fun for her as it has been for me.

The separation process that inevitably happens between a parent and a child will  become more pronounced, now that she’s around older kids and finds it harder and harder to live under her parents’ roof. I know that feeling because I remember it myself.

For now, I’ll smile and hope that she gets off to a good start in her new school. I hope she gravitates toward those who will build her up and make her better, rather than those who will tear her down. There are both kinds of people in the world, and learning to tell the difference between them is never an easy thing. But I’ll hope for the best, and be there to help her out in any way that I can. That’s in a parent’s job description, isn’t it?

Come to think of it, that’s the entire job description. 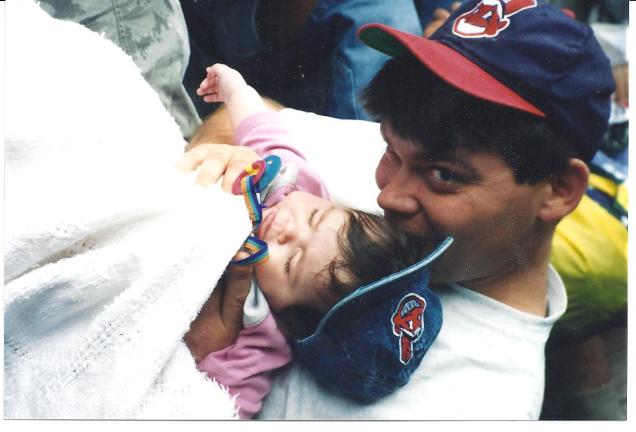 Pyromania was Def Leppard’s breakthrough album, and I remember it well. I was 14 when it was released, and a freshman in high school. When “Photograph,” the best song on the album, came on the radio the other day, I was instantly transported back to the point in my life where I owned this on a cassette, and would put the cassette into my fake Walkman, turn up the volume, and embrace all of the teenage angst that was swirling around me in every direction all at once. I miss those days, sometimes, but I wouldn’t want to relive them, either.

When the song came on the radio, and as I listened to the lyrics about a “passion killer who’s too much,” and all of the rest of it, I began pondering the ways that photography itself has changed since 1983. It used to be that you snapped a picture on a camera, not knowing whether it was a good photo or not, and took the film in to a store in order to be developed. If you were really in a hurry, and willing to pay extra, you could have the prints back in an hour. Otherwise, it took a day or two before they were ready, and you had to go back into the same place you dropped them off at to pick them up. Those were the kind of photographs that Def Leppard was singing about back in the 1980s.

It’s also the kind of photographs that are at the heart of a remarkable new book named Baseball Fantography by Andy Strasberg. The premise of the book is stunningly simple: If we’re baseball fans, then we must have some old photos that relate to the game in some way. Maybe you saw Rod Carew at Spring training one day, and took a picture to remind yourself (and maybe impress your friends, too).

Rather than letting those photos gather dust in an old album or a box hidden away in the attic, why not put them together into a book, and share them all with the rest of baseball fandom? The result is like looking through a scrapbook, at candid pictures that nobody–save for a few close friends of the picture taker–has ever seen before. It works amazingly well as a concept, and this is the first of (hopefully) many scrapbooks about the game that touches so many of our lives.

In addition to the photos, there are many great pieces about the game, from essays about ballparks, broadcasters, and players, to fascinating little tidbits about the game I might never have learned otherwise. And there’s even a passing reference to the Cubs’ own Ronnie “Woo Woo” Wickers. But the best part of all comes at the end of the book.

The rise of social media, and Facebook in particular, has made us far more willing to share images of ourselves than we once were. And we’re also more willing to look at images from other people’s lives, as well. The picture above is a perfect case in point.

I sat down with a box of about 500 photos from various times in my life, from about 1995 to 2000 at the latest. They weren’t categorized in any form, but I was entirely confident that at least some of the prints were related to baseball. Whenever I go to baseball games, I take pictures to record the experience for posterity. I always have done it, and probably always will do it.

The picture above was taken at Jacobs Field in Cleveland (some now call it Progressive Field) on July 4, 1999. The little girl asleep on my lap is now a teenager, and if she doesn’t love baseball, well, it isn’t for a lack of trying on my part. There were several other shots that I had to choose from, taken at Wrigley Field, Coors Field, and the Baseball Hall of Fame in Cooperstown, but this one was the one that I liked the best.

I scanned this image into my computer, inserted it into this blog post, and will also submit it to the Fantography web site, as well. This is an interactive experience that, even a few years ago, wouldn’t have been possible with a book. But there’s really no reason not to see if anything I have would be of interest to them, either for posting on their website or inclusion in a future book.

I even went so far as to submit a few original pictures that have appeared in posts on this site previously (here and here and here, among others). If I’ve already shared these with the internet community, why not repurpose them for Fantography, as well? And if it brings a few more eyes to this blog, so much the better, right?

The photograph as I once knew it, and that Def Leppard once sang about, might already be a thing of the past.  But millions of them are still around, and Fantography offers a innovative way of gathering and sharing these relics-in-waiting in our digital and social media-driven milieu. It’s a concept that’s well worth checking out.